Winstrol is largely known in professional bodybuilding as the ‘cosmetic’ steroid because of its muscle hardening and drying effect, which gives you the competition ready physique.

Most bodybuilders consider adding it to the fag end of their mass building cycles, because any water retention that they might have made during the bulking process can be flushed out with Winstrol.

However, this use has somehow been misconstrued on messaging boards making it appear that Winstrol is more of a cutting compound 1.

While it is a terrific anabolic compound that has some very unique traits, it is not a fat burner.

In fact, most people won’t notice its fat burning effects at all, unless they are very conditioned and in top shape.

The question that you need to ask yourself is whether Winstrol is worth adding to your steroid cycle.

Here’s the lowdown on this ‘aesthetic steroid’ 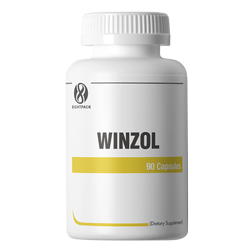 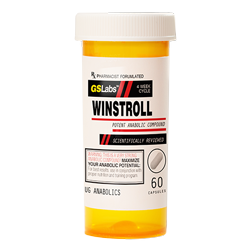 Anabolic steroids can be largely grouped into three families of Drugs.

Winstrol belongs to the DHT family and largely has all the traits of a DHT-derived compound.

Two structural modifications are made to the DHT hormone to create Stanozolol. Firstly, the 3-keto group is replaced with a pyrazol group at the A-ring. Then a methyl group is added at the 17th Carbon position. 2

Those familiar with the chemistry of androgens will recognize that this makes it a C17-AA steroid, which will be broken down by the liver.

Winstrol is available in both oral and injectable versions.

What’s unique about it is that both versions are C17-AA and exactly identical in their action.

So any theories or suggestions that mention that one version of the compound is better than the other should be taken with a grain of salt.

In therapeutic settings, the dosage of Winstrol ranges from 2-10mg/day, depending on the intended use.

For females, even 4mg produces the desired results.

In a performance enhancement setting, most men will start with 25mg/day and increase to 50mg/day depending on how they react to the compound.

Anything more than 50mg/day greatly reduces the rewards and increases the risks. Some people experience severe headaches and nosebleeds at 75mg/day. In professional bodybuilding, doses as high as 100mg/day as not uncommon.

For females, Winstrol poses are high risk of virilization like most other DHT-based drugs, except Anavar. Even 5mg/day should suffice if the athlete is lean to begin with.

If 5mg/day is well tolerated, then 10mg/day can be considered.

As mentioned, there’s little to choose between Winstrol Depot and oral Winstrol. If you prefer the injectable, then it has been associated with severe PIP.

Despite being approved for therapeutic uses for the treatment of angioedema in many countries, there are just a handful of brands that manufacture Winstrol.

So getting your hands on pharmaceutical grade Stanozolol might not be as easy as procuring other steroids.

That said, Alpha Pharma is one of the best brands that offers 50mg tablets under the brand name Rexobol.

Swiss Remedies is another brand that you can consider. Neuro Bal by Cadila is a great choice too, but not as easily available.

Winstrol is a compound with very specific effects that can either be very useful to the athlete 3, or just an added strain to their liver.

Hence, it is extremely important to know how you can use this compound to derive best results.

If you are a non-competitive, functional athlete, or partake in sporting events that require you to perform at your best, then there’s no better drug that Winstrol. It will produce a dramatic increase in muscle strength. Powerlifters will be able to cruise through their plateaus. Cyclists will be able to cycle faster for longer. Sprinters will be able to set new sprint records. For recreational bodybuilders and gym rats looking to set new personal bests, Winstrol, even at low doses is a great choice. The added advantage of using Winstrol is that unlike Dianabol, which also produces strength gains but also makes you gain a truckload of mass, Winstrol will keep you lean. There won’t be any immediate ‘Oh, you are using roids’ red flags.

Competition-ready athletes usually add Winstrol to the end of their cycles. Sometimes for just 7-10 days at high doses. This has a dual effect. Firstly, it flushes out any additional water that you may be holding due to the use of wet compounds, like Testosterone, Deca Durabolin or Dianabol. This produces the paper-thin skin effect, as it is often called. Without subcutaneous water retention, your muscles appear more defined. The vascularity becomes more prominent. Ever seen bodybuilders with granite-hard muscles, while yours looks fluffy in comparison? That’s the Winstrol effect. Secondly, being a powerful DHT-derivative, Winstrol also has a direct effect on lipolysis. So, yes, it does burn fat. But you’d have to be at least at 11-13% body fat for the fat burning effect to be noticeable.

Winstrol is not a powerful mass builder. While it has been used in therapeutic settings to prevent muscle wasting, it’s not the ideal compound for such situations.

There are much better choices without the hepatotoxicity associated with Winstrol.

Safety and Side Effects of Winstrol

Best Winstrol legal alternative to boost strength and get lean.

Any oral C17-AA anabolic steroid will be liver toxic. But some compounds are tolerated a lot easier as compared to others.

Anavar for example is less liver toxic than Dianabol.

Winstrol’s hepatotoxicity falls somewhere in the middle. With liver support, you should be able to have a reasonably safe ride, provided you stick to the lower end of the dosage spectrum and do not use it for more than 4-6 weeks. 4

Winstrol will also have a negative effect on your high-density lipoprotein levels, while subsequently increasing LDL levels. If you already have a poor cholesterol profile, then you should refrain from using oral steroids. 5

On a positive note, it does not aromatize into estrogen. So it does not cause gynecomastia. Androgenic side effects are possible. However, it’s extremely rare unless you are already prone to balding and acne.

No Result
View All Result