Anavar enjoys unprecedented popularity among fitness models and recreational steroid users for more than one reason.

At the forefront, is the safety halo that this steroid is surrounded with, whenever it’s mentioned on messaging boards and the likes. 1

The general consensus is that Anavar is a safe enough steroid that even rank newcomers and females can run it.

The second is its ability to dry out muscle tissue and produce a hint of vascularity, something that even a barebones testosterone cycle cannot produce.

If you have always wondered whether an Anavar steroid cycle can produce the kind of results you were hoping for, then here’s a complete guide that will help you understand how this steroid works. 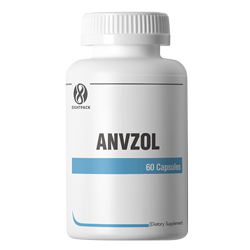 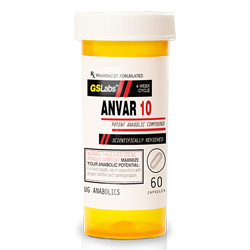 Anavar or Oxandrolone is a dihydrotestosterone (DHT) derived anabolic steroid with 2 structural changes made to the DHT hormone. The first modification increases the steroid’s anabolic activity, while greatly reducing its androgenic activity.

The second modification is the addition of the methyl group at the 17th carbon position which is what makes it an oral steroid that will be metabolized by the liver.

Not surprisingly, that’s one of the reasons why a lot of athletes prefer using Anavar.

The dual modifications give Anavar a very favorable anabolic rating of 320-630.

However, it has many other favorable properties which make it better than test for both males and females with specific fitness goals.

The typical performance enhancement dose for male athletes starts at 25mg/day and can be as high as 80mg/day, depending on the individual’s experience with chemicals and their fitness goals.

If this is the first time that you are using Anavar, it is recommended that you start with 25mg/day for two to three weeks and then increase the dose to 50mg/day for the remainder of the cycle.

The average cycle duration should not increase 8-weeks at these doses.

Females can achieve significant changes in their body composition at doses as low as 10mg/day. Rarely will they need doses as high as 20mg/day. At these doses, there is an increased risk of virilization, mind you.

Anavar is typically available in 10mg tablets. But in some UGL labs, you’ll also find 5 and 50mg varieties, with the latter being the easiest to dose with if you are a male.

Since Oxandrolone is used for therapeutic purposes in most parts of the world, other than the United States, it is reasonably easy to find pharmaceutical brands like Meditech, Genesis, Alpha Pharma, Eminence labs and Balkan Pharma.

Because of the high possibility of being faked, it is recommended that you source pharmaceutical brands only, if possible.

In a therapeutic setting, Oxandrolone is a highly effective weight management tool that’s administered to HIV patients, cancer patients and even children suffering from hepatitis.

In a performance enhancement setting though, it’s rarely used to increase muscle mass. It is the diuretic effect, clubbed with a hint of lipolysis that it promotes that’s more popular.

Here’s what you can expect if you add Anavar to your testosterone cycle or even run it solo.

Because it’s a DHT-derived anabolic steroid that will increase nitrogen retention, the production of RBC as well as increase protein synthesis, there will be a nominal increase in lean muscle tissue. However, the results will be a lot more pronounced if you run it with a testosterone base. If it’s a solo Anavar cycle, then you might gain 4-8 lbs. of lean muscle mass, which is not significant if you are a bodybuilder. 2

As mentioned in the above cited clinical study, Oxandrolone administration in supraphysiological doses will also increase your muscle strength. But it’s not a steroid that’s preferred by athletes looking for increased strength. There are much better alternatives, like Winstrol.

This is where Anavar really shines in a performance enhancement setting. It promotes dryness, which is a very desirable trait for fitness models as well as recreational gym users. Most base anabolic steroids are wet compounds. Adding Anavar to the cycle gives you that dry, aesthetic physique that most people crave. The vascularity will also be very pronounced with evident, visible veins all over the body.

Anavar is one of the only anabolic steroids that burns fat directly. Most steroids do promote lipolysis indirectly by slightly increasing the metabolic rate. But Oxandrolone binds strongly to androgen receptors and increases the thyroxine-binding prealbumin, which in turn allows the body to use the hormone T3, more effectively. This results in visible fat loss, especially in areas that have stubborn fat deposits, such as the trunk and belly. The reduction in adipose tissue can have profound beneficial effects such as improved insulin resistance. 3,4

Safety and side effects

As we mentioned in the beginning, Anavar is so popular because it has an excellent safety profile. It has been administered to children and even infants for prolonged time durations in therapeutic settings. 5

The side effects if any, have been manageable.

That said, you will be using it in performance enhancement doses, which does pose some risks.

Since Anavar does not aromatize, there is no risk of developing gynecomastia, nor does it trigger hair loss in men.

In women, there is a risk of virilization at doses more than 20mg/day. But even that is very miminal as compared to other compounds.

No Result
View All Result